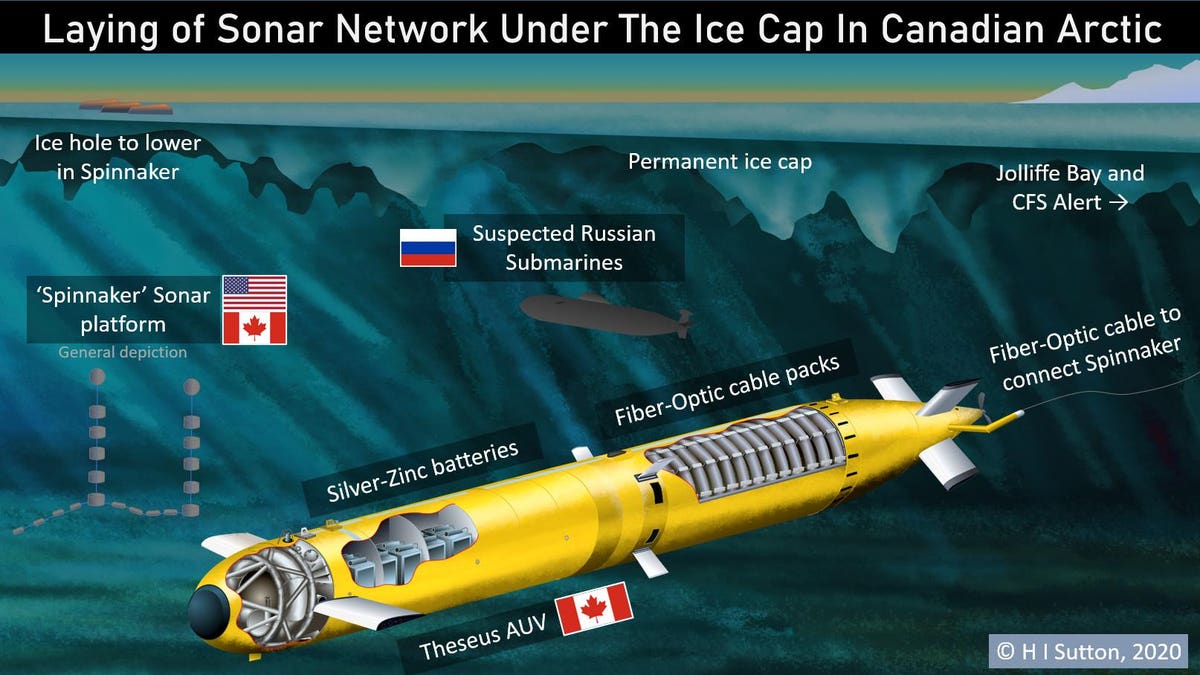 Extra-large autonomous submarines could revolutionize intelligence gathering and underwater espionage. One of these innovative projects is that of the United States Navy Boeing Orc Extra Large Unmanned Underwater Vehicle (XLUUV). It is much bigger than any other underwater drone currently in the water. But there is a historical precursor who, despite its epic Cold War history, is not widely known. And its mission, to establish covert sensor networks in the Arctic, may be as relevant today as it was then.

During the Cold War, NATO believed that Russian submarines used the Canadian Arctic ice cap as cover to secretly move between the Atlantic and the Pacific. The United States and Canada have therefore installed a special sonar network there, deep under the ice. Canadian engineers had to build the world’s largest autonomous underwater vehicle (AUV), Theseus, to lay a cable where ships couldn’t reach.

The project began in the 1980s, at a time when Russian submarines were getting much quieter. To listen to them, a joint US and Canadian sonar array had to be positioned several hundred miles north of the remote Canadian base at CFS Alert. The table was codenamed Spinnaker, in honor of the bar where scientists made many of the project’s unclassified decisions. It was similar to the now famous SOSUS (Sound Surveillance System), but used classified technology to match its operational circumstances. In fact, it had to be much more advanced than the original SOSUS.

Connecting the sonar network to the base would require laying a fiber-optic cable hundreds of kilometers below the permanent ice cap. The solution was to build the world’s largest autonomous underwater vehicle. The unmanned submarine would swim from a hole in the ice closer to the base to the Spinnaker array. Gradually, the cable unwound from the rear. Thus “Theseus” takes its name from the mythical hero of ancient Greece who dragged a thread behind him when he ventured into the labyrinth to fight the Minotaur.

When you think of advanced Canadian military projects that were ahead of their time, Avro Canada CF-105 Arrow comes to mind. This Mach-2 delta wing fighter flew in the 1950s and was state of the art at the time, one of the best planes ever. But it was abruptly canceled in 1959 before it could enter service. The AUV Theseus is up there with the Avro Arrow, but less well recognized. And unlike the Arrow, it was used in an operational way, in one of the most daring projects launched during the Cold War.

The project had many secret aspects. Years later, much of what we know about the project comes from Bruce Butler, one of the core team members involved. Bulter wrote a book, In the labyrinth (on Amazon), and I recently spoke to Underwater Technology Podcast about the project.

Theseus was 35 feet long and about 4 feet wide. In terms of AUV, this is important even today. In modern naval terminology, it would be classified as a Large Displacement Unmanned Underwater Vehicle (LDUUV).

The Spinnaker sonar system was placed on the seabed just on the edge of the Arctic platform. It was about 84 degrees north in the upper right corner of Canada, near Greenland. Such an advanced project took years to come to fruition, so it wasn’t until the spring of 1996 that Thésée was able to get to work on laying the cable. The whole operation was pushing the limits of unmanned underwater vehicles at the time. Despite a few close calls along the way, Theseus was able to navigate to the Spinnaker, letting the vital thread slip out as he went.

Many details of the project and the technology involved are still classified. And we may never know if Spinnaker has ever picked up Russian submarines. By the time it was laid, the Russian Navy was in sharp decline after the end of the Cold War.

But with the resurgence of the Russian Navy today, the relevance of systems like Spinnaker may be greater than ever. And one of the roles that large underwater drones like the Orca could play is to lay cables on the seabed, invisible from above. Historical precedents like Theseus can help us understand how they might be used and the challenges they will face.