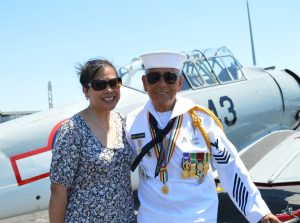 READING, PA. – When war broke out in 1941 between the United States and the Empire of Japan, many young Americans responded to their country’s call by enlisting in the armed forces. 14-year-old Fame Academia’s initial response was to finish school. But a beating by a Japanese interrogator prompted Fame to support a guerrilla war that would thwart Japan’s onerous occupation of its Filipino homeland. When the war ended, Fame would be at sea aboard an ocean-going tug as an enlisted member of the United States Merchant Navy.

We met Fame and his daughter Lynnette last Saturday over WWII weekend at the Mid-Atlantic Air Museum. Lynnette – who lives in the nearby town of Downingtown, PA. – had heard of the annual event in Reading and thought his father would like to see the sights and connect with some of his fellow veterans.

“My father has so many stories about his time in service, from his enlistment in the Merchant Navy to his entry into the navy in the Korean War, Vietnam and his ten-year service under Admiral Moorer. I wanted to bring it here, but we didn’t know this event was so big! That’s wonderful.

Fame’s memories of his service began with his first encounter with the Japanese and his eventual enlistment in the Merchant Navy.

“I was just a teenager when the war started. Too young for the army, so I continued in school while secretly supporting the guerrillas. My father and I were both severely beaten by a Japanese interrogator. When MacArthur arrived I went to Manila to join the service I could. An American colonel – I don’t remember his name – sent me from Manila to Subic Bay to join the Merchant Navy and help with the overhaul of a tug that was being sent to Mindanao. But when we finally got off we went to the Solomon Islands to help remove a stuck freighter that was loaded with tanks and ammunition. “

Fame’s service during World War II often led him into danger. He also placed it near the Okinawa coast in 1945, where women threw their children off the cliffs – then jumped to their deaths – to avoid being captured by US forces.

Fame Academia remained in the Merchant Navy for seven years, then joined the US Navy during the Korean War, serving aboard LSMs and destroyers. His service aboard a ship during an engagement along the Korean coast earned him a Purple Heart and, over time, a chance to see defeat in the eyes of some of his enemy fighters.

“We were sent by NATO to pick up around 130 Chinese who had surrendered and said they did not want to fight in Korea anymore. But the LSM was too big, so we got on my old tug. Once we secured the men under the bridge, we were told to deliver these prisoners of war to the Chinese coast. But the enemy was still in the area, so we had to navigate at night under cover of darkness. We had sailed from Manila in Korea, to the coast of mainland China where we released the prisoners of war, then returned to Manila, with no identification and no lights on. But no one told us when we started who we were going to look for or where we were going to take them. “

Fame told us he enjoyed his time at sea and especially his service under Admiral Moorer. He also said he was sorry that he was unable to attend the funeral of the late Chief of Staff.

During our brief conversation, Fame repeatedly said that he had never been paid for his wartime service. “I think they must have misspelled my name when I enlisted.” 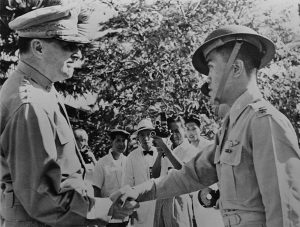 We joked that his check was probably lost in the mail or stashed safely in the pocket of the late Admiral Moorer’s coat. But a review of the historical records revealed what appears to be worrying confirmation of Fame’s claim.

In the 1944 GI Bill of Rights, Allied fighters from 66 countries were included as beneficiaries of some of the best care that country could offer. Only the men and women of the Philippines – who were promised official recognition for their service at the start of the war – were deliberately excluded from American largesse.

Subsequent post-war legislation, known as the Rescission Act of 1946, in part provided that the service of Filipinos: “shall not be considered to be or to have been service in the military or national forces of the United States. United States or any part of it or any United States law conferring any rights, privileges or benefits.

Filipino veterans will eventually gain citizenship through the Immigration and Nationality Act of 1965. And legislation pushed by former Rep. Colleen Hanabusa (D-HI) has led to Filipino veterans being recognized with the law. on the World War II Filipino Veterans Congress Gold Medal. .

Otherwise, the immeasurable role played by Filipino veterans in winning the war in the Pacific remains largely forgotten.

Hailing from the Philippines, Merchant Marine and US Navy Veteran Fame Academia has a chest full of medals. But since last Saturday, the old sailor is still waiting for his check from Uncle Sam.

“Give me ten thousand Filipinos and I’ll take over the world!” “ 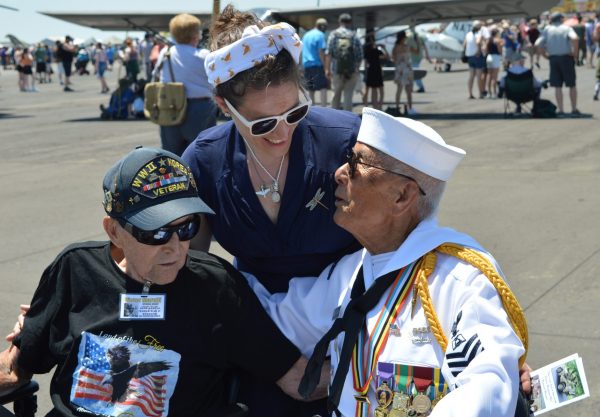