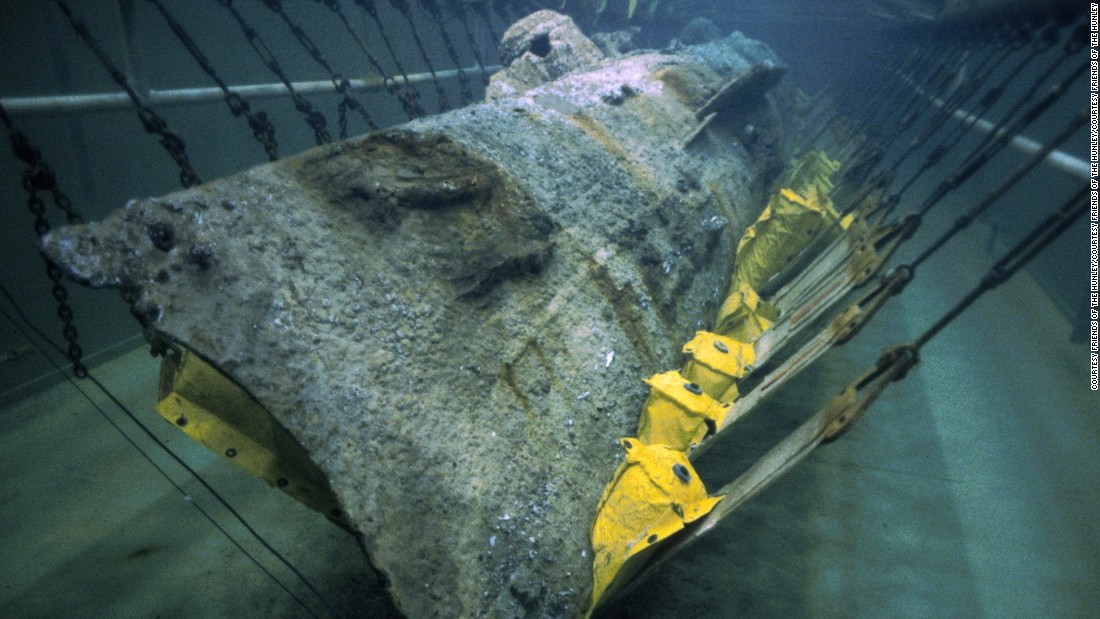 There was no major damage to the hull that can be definitively traced until one day the HL Hunley, a 40-foot-long Confederate submarine, sank to the ocean floor off Charleston, in South Carolina, February 17, 1864.

A number of theories tried to explain the mystery of the Hunley: maybe the crew went too far, misjudged their oxygen supply, and got trapped by the current. Perhaps a nearby ship collided with the submarine, knocking it off balance in chaotic waters. Perhaps a bullet passed through a porthole, killing the captain and leaving a besieged crew adrift at sea.

The Hunley became the first submarine to sink an enemy ship in combat: the USS Housatonic. But some time later, it also went down.

He sank the enemy ship with a 135-pound torpedo, which was filled with black powder and attached to a pole 16 feet from the ship’s hull. The study’s authors say the torpedo is the key, but many wondered how an explosion could have killed the entire crew without leaving a trace.

To answer this question, biomechanist Rachel Lance designed a model of the Hunley, one-sixth the length of the 40-foot-long submarine. The model, built by sculptor Tripp Jarvis of Durham, was dubbed the CSS Tiny.

Lance, then a graduate student at Duke University and an engineer at the Naval Surface Warfare Center, decided that it would set off test explosions next to the model submarine. So she found an eight-acre pond on a family farm in St. Louis, North Carolina. Bert Pitt of Pitt Family Farms agreed to let Lance use the pond for his experiments.

“When she first talked about blasting I was a little worried,” said Pitt, 65, a sixth-generation family farmer, whose grandchildren are now eight generations.

Pitt recalled the wires that meandered through the lake and the charges that exploded below the surface, throwing water into the air like a large firecracker, he said. One of her grandchildren was able to push the button.

“There was a little geyser,” he said. “It was great to see.”

Pitt, a self-proclaimed history buff, had always been interested in the Civil War. He has ancestors who were in the North Carolina regiments, and at least one of them is buried in their family’s cemetery. The house he lives in was built in 1830, before the Hunley sank.

He carefully watched the Hunley reports on the History Channel and the National Geographic Channel.

“They were perfectly still in this submarine,” Pitt said. “I think people would like to know what happened to the crew. Everything about the story is intriguing.”

Without leaving a trace

Suspended inside the CSS Tiny was a small pressure gauge, which revealed how the submarine’s torpedo explosion could have killed the Hunley’s crew without leaving a lasting mark: the shock wave created by the explosion. .

The shock wave hit the Hunley’s hull, which was less than an inch thick, said Lance, lead author of the new study. The metal bent slightly but fast enough to transfer the shock wave inside the cabin.

This wave then passed through the cabin, hitting each of the eight crew members, passing through their bodies. But the real damage, Lance said, likely happened when the pressure wave hit their lungs.

“The problem is when it goes through (the tissues) and suddenly hits the air,” she said.

Shock waves, like sound waves, travel quickly in water and solids but not in air. The wave slows down when it hits the lung, Lance said, and “that energy has to go somewhere.”

The end result: The blood vessels in the lungs can rupture, which is called pulmonary hemorrhage.

“It was … noted that men could be killed or disabled at a considerable distance” from an explosive, wrote Dr. Thomas Chiffelle, a pathologist from Albuquerque, New Mexico, in a report. 1966 report for the US Department of Defense. “Man or animal can be killed instantly, with no outward sign of injury, but often with blood-stained foam or frank blood appearing in the nose and mouth.”

It is possible to survive a shock wave from quite a distance away, according to Chiffon accounts. Testimonies from the night of the Hunley’s sinking claimed that there was a blue light coming from the ocean. Some have speculated that it was the Hunley crew reporting that they had completed their mission.

But Lance, who is working on a book about the Hunleys, said she had doubts about the inconsistencies in those testimonies.

It’s virtually impossible to tell how powerful the Hunley’s torpedo was, even with the amount of black powder used. The explosion can also change depending on the degree of compaction of the powder and the fineness of the grains, depending on the Command of Naval History and Heritage. Replicating the black powder explosion, Lance said, was the trickiest part of the experience.
So Lance played it down, testing several explosions in the process. She concluded that the shock wave would have instantly killed those aboard the Hunley, based on her calculations and a wealth of previous information. air blast experiences on large animals.

“Any explosive that we saw on the ground… would definitely create a deadly wave,” Lance said.

“These types of injuries are not subtle,” she added. “The damage is immediate.

There was another piece of evidence that was in his favor: a gold pocket Watch that belonged to the captain of the Hunley, Lieutenant George Dixon.

The watch had stopped at 8:23 a.m., around the time of the Hunley attack, historians say.

“More importantly, it seems he didn’t calm down naturally,” according to one update 2007 by a research partnership known as Project Hunley. “Something traumatic – maybe water, a shock wave, or some intervening force – made it stop at that exact moment.”
Friends of the Hunleys – part of the Hunley Project, which was not involved in the new research – declined to comment on the research. The organization maintains and searches for the original submarine.
Before naval research concluded that “none of the phases of the explosion were severe enough … to have a significant impact on Hunley”.
“We had a lot of submariners who survived depth charges at very close range during WWII,” said Paul Taylor, spokesperson for Command of Naval History and Heritage. “You kind of wonder how they got on with it, but apparently the people at Hunley didn’t.”

Navy researchers who have been examining the Hunley for more than a decade have declined to comment on Lance’s study as their own research into the crew’s deaths is underway.

But Lance, for her part, said she felt that part of the mystery had been solved.

“This project was originally intended to be a side project and then it got out of hand when we realized we could do it,” she said.