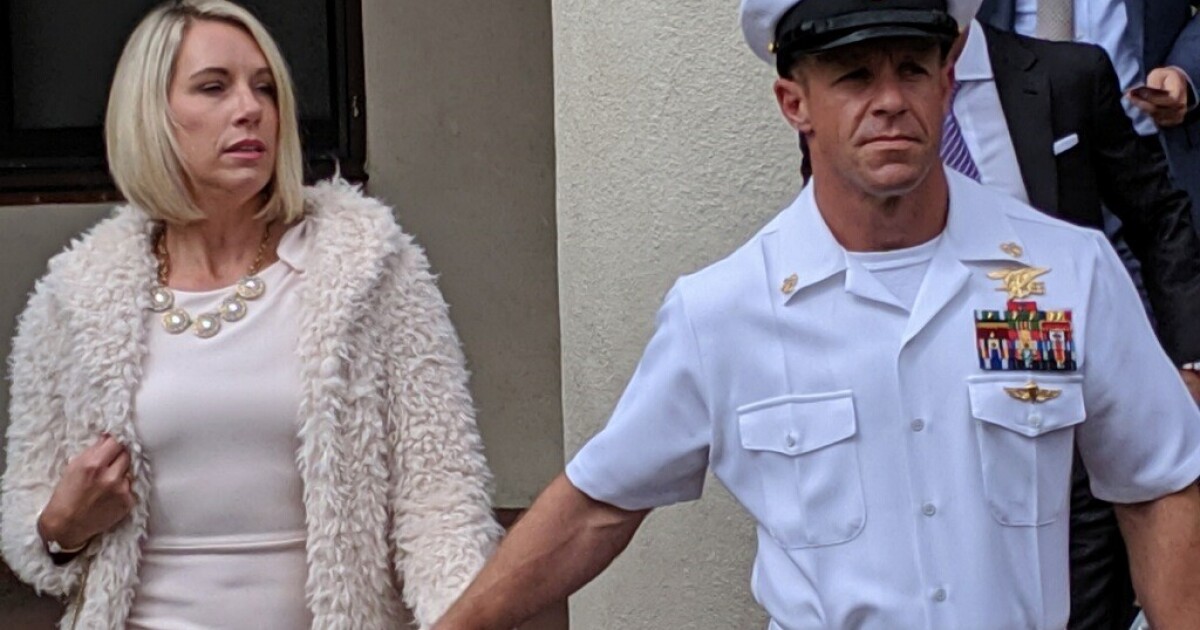 Navy: Navy SEALs who declared their leader to be “liars”

A Marine Staff Sergeant said Thursday that a Navy SEAL chief accused of murder, Edward R. Gallagher, failed to stab an injured teenage ISIS fighter in Iraq. He said the SEALs who testified differently were lying.

Kirylo said that in the spring and summer of 2017, he was attached to the SEALs to provide battlefield intelligence as the platoon helped Iraqi forces fight to retake Mosul from the Islamic State.

He said he had become close to members of Gallagher’s platoon, but the accusations against Gallagher have since separated them.

Gallagher, 40, is charged with premeditated murder in connection with the alleged stabbing of the injured fighter. He is also accused of shooting civilians and indiscriminately shooting other non-combatants while deployed to Iraq.

Gallagher denies all charges and has pleaded not guilty.

Several members of Gallagher’s platoon brought war crimes charges shortly after the platoon returned from Iraq in September 2017. Two of them testified at the trial only after Iraqi forces brought in the fighter. ISIS wounded at SEALs for medical treatment, they saw Gallagher stab the fighter in the neck.

Kirylo, the Marine, said he was part of a “slut circle” of SEALs who frequently complained about Gallagher and his battlefield tactics, such as using his men as bait to lure. ISIS operatives.

Kirylo said in May 2017 that he had identified the building targeted by an airstrike. He said he was at the scene when the ISIS fighter injured in the strike was brought to the SEALs.

Kirylo said it was his voice the jury heard on a short video of the fighter’s arrival.

Kirylo said in the video, “Eddie is going to kick him out, man.”

A prosecution lawyer tried to ask Kirylo what he meant; was it in response to something that several other witnesses said they heard Gallagher say on the radio, “No one is touching him; he is mine.”

But Kirylo said he hadn’t heard Gallagher say that. He did not explain further.

Kirylo testified that a SEAL medic, Petty Officer 1st Class Terence “TC” Byrne, injected something into the fighter’s arm, then leaned over Kirylo and said, “This guy is going to feel everything we do. let’s do.

He said SEAL medics, including Gallagher, treated the fighter until he died of his injuries. Kirylo said he and many of the peloton then posed for “trophy photos”.

He said he looked under a bandage on the right side of the fighter’s neck – a bandage according to prosecutors covered the stab wounds – and saw no blood or wounds.

Lt. Scott McDonald, a Navy prosecutor, challenged Kirylo’s account during cross-examination, asking him why he had not come forward after Gallagher’s arrest.

“Didn’t it occur to you to tell NCIS that you looked under the bandage and didn’t see the stabbing?” McDonald asked.

Kirylo did not respond, but later said he feared a reaction from his chain of command and didn’t think investigators would believe him.

Kirylo said he always accompanied the SEALs on these tours. He was carrying classified material and working with a linguist to keep SEALs informed of nearby IS movements.

Kirylo said he had never seen Gallagher shoot civilians from these towers.

He said ISIS would use women to transport ammunition and that male fighters would often disguise themselves as women. He said most of the platoon shot women during this deployment.

The Marine also said he remained close to some SEALs after deployment and described Byrne as his “best friend” and an “absolute brother”.

Kirylo said the friendship ended “once (Byrne) started lying … about his conduct that day”.

In a video released during the trial, Byrne is seen operating a drone on the body of the dead fighter.

Kirylo said the platoon was happy after the fighter’s death because the successful airstrike – which he said wiped out an ISIS commander – was a big victory.

Kirylo said he was no longer friends with Chief Special Warfare Operator Craig Miller, who testified that he saw Gallagher stab the fighter.

Miller, along with other prosecution witnesses, said the meeting was about Gallagher stabbing the fighter.

Kirylo said it wasn’t true. Miller ordered the men to delete the photos the platoon had taken with the fighter’s body.

Jurors also heard video testimony from Iraqi Major General Abbas al-Jubouri, head of the Iraqi Emergency Response Division, who worked with Gallagher’s platoon during the deployment. Abbas said he brought the injured fighter to the SEAL compound and stayed with him until his death.

He said Gallagher had never stabbed him.

Schmunk said there was no way to determine the injured fighter’s cause of death as there was no physical evidence to examine, just photos of the body and a bandage covering part of his neck.

Schmunk suggested that because the bandage did not appear to be soaked in blood, it could mean there was no stabbing. However, during cross-examination, he also said that if the bandage was applied after the fighter’s death, there would be no blood on it.

Defense attorneys said they wanted to call Lt. Cmdr. Robert Breisch Friday morning. Breisch received a “target letter” last month informing him that he was under investigation for a possible attempt to cover up war crimes.

The defense requested immunity from testimony. It is not known if the Navy will grant it.

Defense lawyers have also requested the immunity of Lieutenant Jacob Portier and would like him to testify. Doorman is billed separately as part of the deal.

A Navy spokesperson said Thursday he could not say whether Breisch or Portier would receive immunity.

Gallagher’s trial is expected to last until next week.