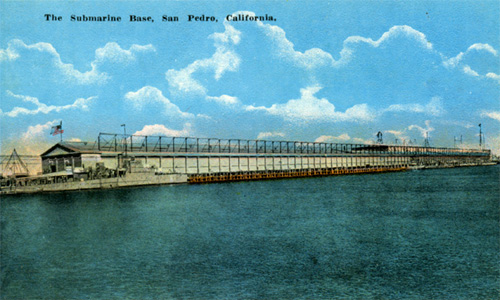 Submarine technology had been developing for decades by the time the US Navy commissioned its first modern-era submarine, the USS Holland, in 1900.

The armored warships Monitor and Merrimack staged the famous 1862 battle of Hampton Roads in Virginia during the Civil War. The Confederates reused the Merrimack after recovering it from a Union shipyard and renamed it Virginia for battle. But these rock-solid warships were more precursors than fully functioning submarines.

The sophistication of the modern submarine peaked with the arrival of World War I and German submarines. Two days after the declaration of war in 1914, Germany sent 10 of its 29 submarines to the North Sea to fight British warships in the first ever wartime submarine patrol operation.

During the war, stealth submarine attacks destroyed over 5,000 Allied ships and much of the British Merchant Navy.

They also sank the RMS Lusitania on May 7, 1915. The deaths of 1,198 of its passengers, including 128 Americans, prompted American public opinion to join the global war effort, which the United States did. done two years later.

The Navy realized that in a world war both American coasts had to be protected and set out to find a suitable location for a submarine base on the West Coast.

With its strong naval presence, San Diego was considered, but naval experts deemed its waters too shallow and unprotected to house submarines.

On February 13, 1917, the San Pedro Daily News (later to become the News Pilot) reported that, despite initial reports to the contrary, the Navy had chosen the port of San Pedro as the location of the first submarine base on the coast. Pacific, and had allocated $ 500,000 for the project.

The port of San Pedro had deep, kelp-free waters, reliable weather, and calmer ocean conditions. Port officials offered the Navy free use of the land along the eastern English Channel just south and east of Warehouse No.1, which opened in 1917 after two years of construction .

Submarines Cheyenne and Alert, depot ships that provided food and supplies to submarines, had already used the area as an unofficial base since 1914, and submarines had used the area informally as early as 1913. .

By mid-June 1917, work on the San Pedro Submarine Base along the wharf was underway and the base’s operations became operational and is reporting to its commanding officer, Captain CF Preston. He was followed by Commander HC Poundstone, who served until 1918. The base would have several other commanders over the next four years.

About a dozen submarines were based at the San Pedro facility in 1917 and 1918. At its peak, the submarine base numbered approximately 1,400 people.

After studying and examining it, the base crews used it for target training, sinking it on March 1, 1921. (Divers discovered its wreck off the coast 82 years later, at summer 2003.)

The rapid growth of business at the Port of Los Angeles may have indirectly cost San Pedro its short-lived submarine base. With the end of the war, commercial interests began to regard the very valuable and well-located submarine base site as an ideal place to set up shipping operations.

In the summer of 1922, rumors circulated that the San Pedro submarine base would be relocated. City officials (and the San Pedro Daily News) vehemently denied the base’s closure. In fact, they worked hard on a plan to increase the size of the base and attract an even larger and more permanent presence from the naval fleet.

In January 1923, the Navy was reluctant to spend the money on the plan, which involved moving the base from its location in order to cede this privileged land to private shipping companies. Instead, it chose to shut down the San Pedro base, moving its submarine operations from the West Coast to San Diego.

This was the end of the San Pedro Submarine Base, although ships would still use the Port of Los Angeles facilities for many years thereafter. The port served as an anchorage for much of the warships of the Pacific Fleet from 1919 to 1940.

Other nearby military assets included Reeves Field on Terminal Island, which served as a training center for Navy pilots during World War II, and the US Army base at Fort MacArthur.

After years of use as a commercial wharf, the East Channel area that once housed the San Pedro submarine base is now part of the larger Altasea development project of the Port of LA; this project is a multi-million dollar marine research joint venture along the southern terminus of Signal Street that also includes Warehouse # 1.

Sign up for The Localist, our daily email newsletter with handpicked stories related to where you live. Subscribe here.

Meet the Turtle: The First Submarine Ever (developed by the Americans to fight Britain)